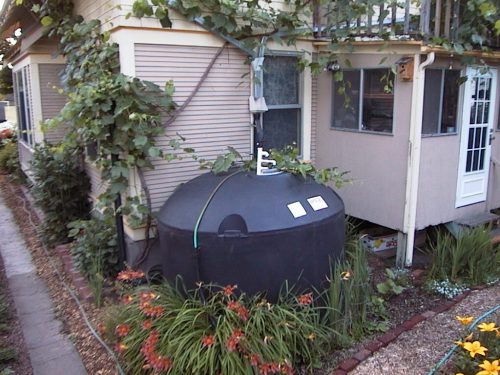 Note: This first appeared in The Oregonian newspaper on June 18, 2007.

One of Portland’s best opportunities to be “green” is going down the drain.
Over three feet of rain falls on Portland’s buildings and streets every year,
flowing across millions of square feet of concrete, roofs and roads into 2,000
miles of sewer lines. Overflow from heavy rains goes directly to nearby
streams and rivers, such as the already ecologically overburdened
Willamette. Though well intended, “Green streets” and stormwater
management efforts divert only a small fraction of this sewer and river-
bound deluge.

As a result, homeowners pay an average of over $75 a month in stormwater
charges on their water bill. To keep pace, Portland has embarked on ambitious
efforts like the Big Pipe Project, which cost nearly $1.5 billion. But every year, more sewer infrastructure is designed, built and repaired to keep up with the city’s rapid growth and demand.

Surprisingly, fresh water is scarce: Less than 2 percent of the world’s entire
water supply is drinkable without desalinization or purification. And, a recent
U.N. report estimates that within the next 20 years, over two-thirds of us will
face fresh water shortages.

In Portland, we’re already placing a strain on our fresh water supply system:
Despite plentiful rainfall, we’ve repeatedly faced water shortages, largely due
to demand and our dependence on one main source — the Bull Run
Watershed — to meet most of our needs.

Europeans, for example, have already seen the value of this precious
resource and are moving ahead in leaps and bounds: they install over an
estimated 100,000 rainwater collection systems annually. In China, where
they’ve practiced rainwater collection for thousands of years, millions rely on
rainwater for household uses and the country is aggressively developing
technology and pursuing ways to make this ancient practice more
widespread.

Despite Portland’s “green” reputation, we’re far behind in this and other
aspects of ecological design and practice. If we really are green — why not
make Portland the model for water use for the rest of the nation, or even
the world?

Within a few decades, every building in Portland could be providing much of
its water needs through use of affordable, efficient collection systems, many
of which are decidedly low-tech and already exist. Portland could become a
world leader in development and innovation, creating technology and
practices that would benefit the region and the rest of the world.

More importantly, collecting rainwater would transform our city and its rivers
and streams. It would reduce the need for sewer infrastructure, make us
less dependent on one main source of water and be a huge, positive step
towards a more local and ecologically sustainable way of life.

Let’s be bold. Invest in developing rainwater harvesting technology and
making it simple, affordable and ubiquitous. Give homeowners real
incentives for installing collection systems. Require those collection systems
on every new building within the next 5-10 years and make it financially
attractive.

If we can do that, the rest of the world will be green with envy.