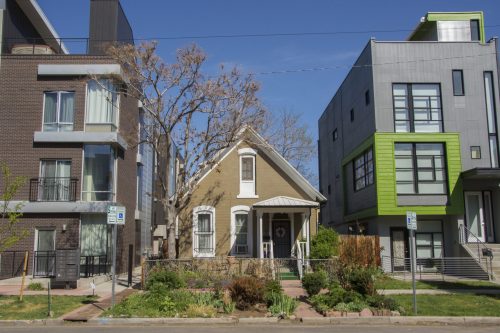 Gentrification is complex. Many say it’s better than the alternative. In many American cities, “blighted” areas are redeveloped or otherwise transformed, often with significant help from local government. Rarely do citizens spontaneously change the makeup of a neighborhood; it’s an act imposed from outside, using money and (sometimes) good intentions.

The district has been losing a vital chunk of its Jewish character to high-end designer labels in a slow transformation that residents say is reaching a turning point. Local officials estimate that as many as 20 Jewish shops in the compact quarter have given way to clothing stores in the past four years.

And now all that is left, as Cheryl Shanks described in the Nine Quandaries of Tourism, is mostly artificial authenticity:

“What remains is a sort of optical illusion,” said Jean Laloum, a historian at France ‘s National Center for Scientific Research, and contributor to a city-sponsored history of the surrounding neighborhood. “Tourists come to visit a sort of ghetto with an identity … which they read about in the guidebooks, but which today, in reality is gone.”

Why? It was a thriving neighborhood. For centuries. People who live there identify strongly with it, wanted it to remain vibrant and real. Not to be static, necessarily, but to remain a cohesive, connected neighborhood with a strong identity, as it had for centuries. But the inevitable forces of “progress” won’t be denied; this neighborhood, which even survived the Nazi occupation and its accompanying deportations, has mostly fallen prey to gentrification. Moshe Engelberg, who ran a Jewish restaurant in the district, gives us a clue at how the wheels turn:

After the city required Engelberg to make costly upgrades to the restaurant, he consulted a rabbi for advice, and concluded that renovating –a concept he didn’t believe in anyway –wasn’t worth the trouble.”It’s not the feeling of the ghetto anymore, it ‘s the feeling of something modern, without a soul,” said Engelberg.

And so it goes, then: first the removal of the authentic:

“They destroyed the oldest Jewish quarter in France in a matter of five years,” said Michel Kalifa, a kosher butcher and president of an association fighting to hold onto the area’s Jewishness.

…then the installation of the facade:

The mayor also said she hoped to install a Holocaust memorial library in the former Jo Goldenberg diner.

Of course not everyone loves the place. Many love gentrification or aren’t too nostalgic or attached to the identity of the district:

“It’s normal that we transform all this,” he [Buchwald] said. “We can ‘t always stay in the Middle Ages. “Leaning forward, he winked, and nodded toward the luxury clothing shops now entirely covering the western half of the street. “You know, the boutiques that are here, they’re Jews who run them,” he said.

It’s tempting to look at gentrification as some kind of manifestation of inevitable change. Urban planners even speak of growth as something to be accommodated or managed, not questioned, and recast it as ‘smart growth‘ or a similarly clever concept.

But I see it differently: instead of nurturing and protecting the delicate webs of communities, we instead treat them like a gigantic Lego set, consisting of interchangeable parts that can be (literally) lifted and dropped into place. Remove the old house, drop in a multi-story mixed use building.

This has a host of outcomes: forced diversity (of incomes, backgrounds, you name it) breeds resentment; racial tensions arise from economic bulldozing; hyper-consumers flatten whole ecosystems, then fly across the globe to those that are not yet destroyed. There are too many things like this to list.

But community, so much more fragile than a Lego set, rarely survives gentrification and externally applied pressure. And so I think we’ve become schizophrenic, craving that which destroys us but unable to choose differently in a way that requires wisdom, multi-generational patience and a deep regard for the limits of places and the fragility of their inherent connections. Our current way of life, in fact, cannot exist without trampling such limits.